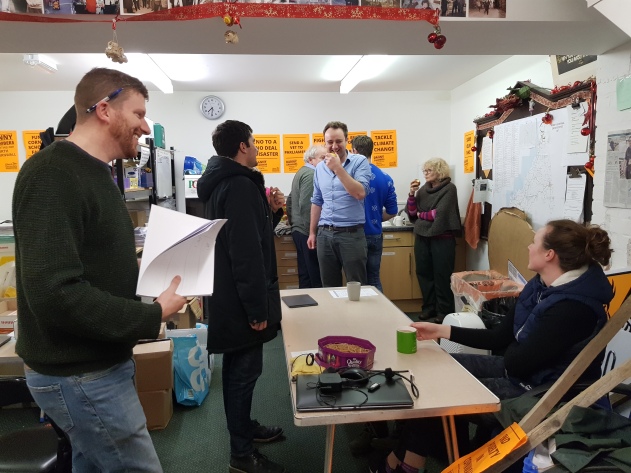 Now that dust begins to settle, I thought it would be a good idea to reflect on my unlikely, borderline surreal stretch of electioneering in North Cornwall. Unlikely for several reasons; not my constituency, not my usual choice of activities in the run up to Christmas, and, last not least, not my party. For those of you who have not heard from me in the last couple of months, I was helping my son and his team in the final stages of their campaign to elect their local candidate to Parliament. The location was Launceston, the party was the Liberal Democrats, the candidate was Danny Chambers, a vet and one of the nicest people you are ever likely to meet.
It is possible that I am still drained by it all, my muscles certainly still aching from all the walking, my brain still processing the experience, which makes coherent reflection difficult. As I look back, all I can see is a series of stubborn images that just won’t go away, so I will share these highlights with you.

On the first day of heavy leafleting I was paired up with an extremely dedicated lady, wisely covered in waterproof clothing from head to toe. She strode across the housing estate with the drive and focus I am not used to seeing often. At the end of our round, as we were waiting by the car for the others to return from their deliveries, I thought I’d have a go at small talk.

Phone banking in campaigning terms has nothing to do with setting standing orders and paying your water bill, but is simply cold calling unsuspecting voters, interrupting their afternoon naps and dinners, to ask them unapologetically intrusive questions, such as what their voting intentions are, and why on Earth it is not going to be Lib Dem this time.

– Hello, is that Margaret? My name is Ania, and I am calling from the Lib Dem office in Launceston, I am working for Danny Chambers…

– Oh, I know Danny, he came to my door last week. Such a lovely boy, isn’t he. I am 93 years old, but I can see why they chose him, I can see how lots of young women will fancy him. It’s always good if a politician is good looking, isn’t it. It’s important that they are pleasant to look at.

Margaret gives out a naughty giggle, which puts a smile on my face. Not for long.

– Hello, is that Julia? My name is….
– I am sorry but I cannot possibly vote for your party, you want to cancel Brexit and I cannot accept that. Do not call this number again or I will report you for harassment. Goodbye.

– Hello, is that John? My name is Ania and I am calling…. Would you mind telling me how you intend to vote on Thursday?
– Well, I was undecided until now, but since you are the only party that bothered to call me, then I guess I need to return the favour and vote for your chap.

And so it goes, until my fingertip hurts from punching the digits on the office phone.

Matt, the campaign manager proudly says to the small crowd who gathered for final Sunday night motivational meeting, ‘every time I go to the pub I tell people something new about Danny, and recently they told me that they feel like they know all about him now’
– Yeah, about that Matt, perhaps you could stop doing it, says Danny in his typical slightly self-conscious hesitant way.

Alright, maybe you would have had to be there to appreciate this one.

Early afternoon. Leaflet deliverer comes back to the office after three hours in pouring rain.

– Cup of tea?
– Yes, please, a quick one, and then I will be on my way again. I thought I would do another couple of hours and then jump on telephone banking for the rest of the evening.

I look at the volunteer, and think to myself, what drives you, girl? You and nearly 200 others like you who keep walking through the unassuming yellow office door every day. What unspoken hopes they bring with them, what silent frustrations push them to extremes of physical endurance. One of the volunteers clocked up 70,000 steps on her Fitbit the other day. This is more than I do in a fortnight. I feel not only like an outsider and an impostor that I am, but also like an intruder, a gate crasher at their special celebration of what is best in their community.

Wednesday afternoon at Launceston town square. Rain, wind, Danny on a soap box, making final speech of his campaign. A handful of us listen, passers-by give him no more than a hurried glance and walk on. Danny speaks with his usual passion, as if addressing a crowd of thousands, mentions his local Lib Dem predecessors and how he feels honoured to continue in their tradition, how he believes we need more scientists in Parliament, he vows to fight child poverty in the region. This heart wrenchingly modest event feels moving in an understated, dignified way. On the short walk back to the office, I find myself willing North Cornish voters from places I have never heard of until a few days ago, to vote for him despite Brexit, despite Jo Swinson, despite myself.

24 hours to go. The Girl with Purple Hair, a keen volunteer, has just had some positive feedback from last minute canvassing and is performing an impromptu victory dance in the office, hands waving, hair tossing, the works, ‘we’ve got it, Danny’s got it, woohoo, we’ve got it!’.
Lip-biting silence greets her, our faces a study in guarded non-committal, as we know that the chances of winning here have always been slim at the very best, but nobody has the heart to snatch this moment of elation from her.

And finally. Just so it doesn’t all sound too saccharine sweet.

I never thought it was possible for a human to develop a mama bear level of protective attachment to a printer but I was proven wrong. My offer to assist one particularly zealous volunteer with printing a batch of 3000 polling day Good Morning leaflets was met with ferocious rejection.

– May I help with the printing?
– No! Absolutely not! I need to print them myself!

That was the only moment in the whole impossibly intense week when I felt a sense of perspective slipping away from the Launceston Lib Dem office.  My self-preservation instinct told me to walk away, and off I went into the relative calm of the raging rain and howling wind to deliver the final fifty letters, handwritten by the candidate.

Election night. A few minutes past midnight. North Cornwall dream all but over. Exit Poll and Blyth Valley result are greeted with shocked disbelief by my hosts, and then it only gets worse by the hour. This is when I part ways with them,  but it’s not until half way between Exeter St. David’s and Reading that I allow myself to celebrate the biggest victory since 1987 for the party I have supported all my adult life. And even then, the feeling is not as punch-the-air joyous as it would have been if I had spent the previous week buying last minute Christmas presents on Amazon Prime like a normal person. Damn you, Launceston!

View all posts by aniaheasley